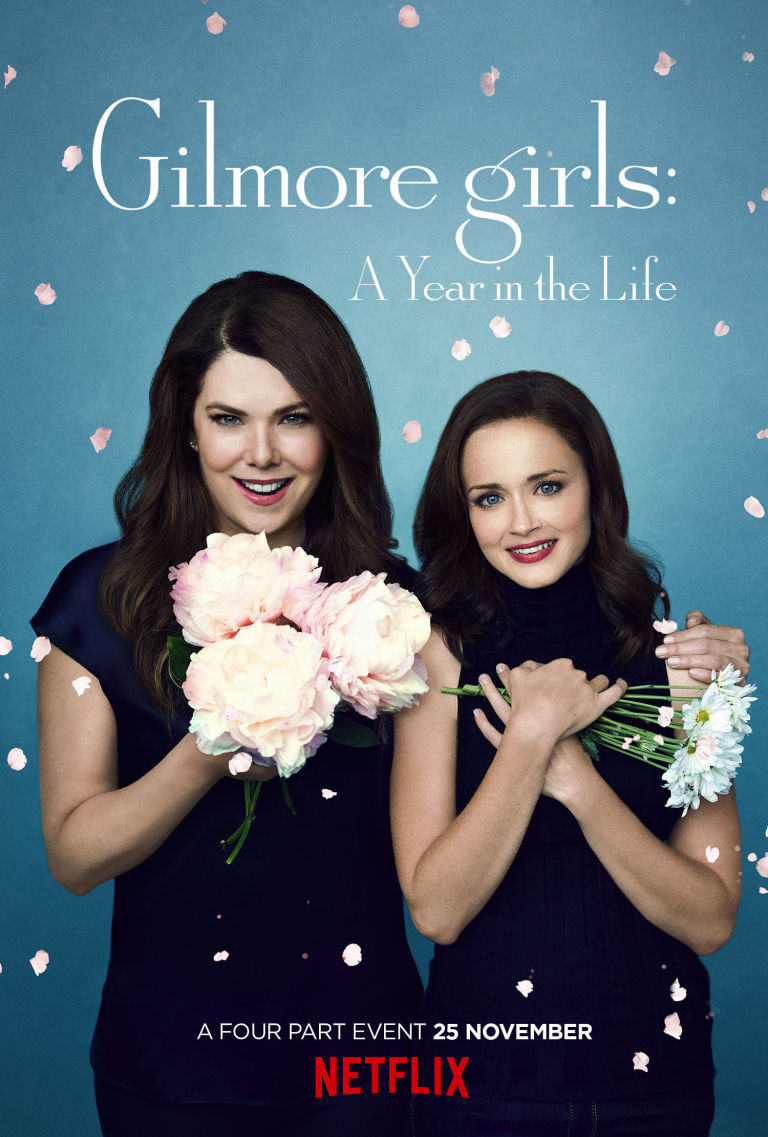 The Gilmore Girls was always a mixed bag of a show. More often than not, though, the problems with the writing were overshadowed by the quirky, quaint, picturesque Star’s Hollow, the kind of town every dreamy eyed twentysomething longs for, the kind of place that could never actually exist in our reality, which made it all the more enchanting.

Perhaps the show would have been better served if it had ended sooner than it did. After a few seasons, you could begin to see the stress on the writers. Gone were the naturally evolving stories, replaced now by questionable decisions from the characters — not questionable as decisions so much as questionable that such (to the show’s credit) well defined characters would actually make such choices. But the show had no choice. It needed drama, and redundant romantic entanglements and love triangles could only go so far.

The limitations were always there, we were just blinded by the charm.

Going into the Gilmore Girls revival, then, I had to wonder if they could bring back that charm, and perhaps do so without the pesky forced plot lines tagging along.

The answer is no…and no. So I guess that’s a win?

Beware, there be spoilers ahead!

No, to really summarize the new GG series, not to mention encapsulate the last one, we only need to look at the very last scene and one bit of dialogue.

Rory’s boyfriend, Paul, breaks up with her via text message. Rory, understandably (BEYOND understandably) says she feels bad that she stayed with him all this time (more on that in a minute).

Taken out of context, this can almost be written off as another of Lorelei’s attempts at being deep. Unfortunately for both mother and daughter, context matters.

And that context involves Rory being horrible to her boyfriend, Paul, for the last year, with every indication that she’d been horrible to him for a good two years before that.

We meet Paul in the first episode, Winter, and he’s meant to be a joke. No one can remember his name even though they’d met him numerous times, some even had lengthy conversations with him. He has the same first name as her dog, yet Lorelei calls him by every other P name she can think of. Even Luke has this problem and he’s the least awful person on the show (well, aside from Sookie). Rory regularly invites him places and then forgets about him, at one point leaving the house without him, at another point nearly leave the town without him.

Rory acknowledges that she needs to break up with him, yet claims to never find the time to do so, which is an unbelievable explanation, particularly given that they have been together for TWO YEARS when the series starts.

It is very clear, in both actions and words, that Rory couldn’t care less about the guy. She is, as the kids say, ghosting him, and she’s very aware of it. She’s fine with hurting Paul because all she thinks of is herself.

And if ghosting Paul were the extent of Rory’s offenses, then that final scene might not strike such a note. But Rory has also been cheating on Paul. She does so throughout the series and for some unknown amount of time before the series. She cheats on him without a thought, without a care, and when Lorelei finds out she hardly blinks. Nary a concerned word.

As if to pour salt in the wound, Rory even has her first one night stand while she is still, ostensibly, in a relationship with Paul. She has her regular affair and then throws a one night stand in for good measure, just in case we though maybe the affair was just a case of extreme emotional confusion.

No, Rory is very aware of what she’s doing; she just doesn’t care.

And so here we are, in a moment of what has to be disingenuous self-criticism regarding her relationship with Paul, a person she spent three years walking on, and how does Lorelei respond?

Rory is a product of her upbringing and Lorelei is just as self-absorbed. The Pauls of the world don’t matter. They are a stepping stone to a greater truth…or something.

Any other person, let alone parent, would perhaps question Rory’s choice involving Paul, at the very least introducing the idea that perhaps she was unkind (a nice way of saying she was awful). They might also mention the fiancee of Rory’s regular affair. But not Lorelei, not one half of the famous Gilmore Girls. They are the star of their own show even when there isn’t one, and all others are kindling for that fire.

If perhaps we can look past Lorelei’s role in creating Rory, her “advice” is just as problematic on its own.

Relationships don’t boil down to whether they “fit” or not. Yes, there has to be a certain degree of compatibility for a relationship to work. But relationships require effort. They’re not shoes. You don’t just try them on and return them if there’s not enough room in the toe. You decide whether or not the relationship is worth the time and effort and if the answer is “yes,” you get down to it. Fitting is nice, but fitting is a very small piece of that puzzle.

But understanding any of that requires both selflessness and introspection, two things which Lorelei sorely lacks.

Could Paul have been the one if Rory had actually been serious about that relationship? I doubt it. But if it never had a chance than the fact that she strung him along for so long is all the worse.

It’s sad. Repeated viewings of the original show had brought me to this conclusion about Lorelei, but I held out hope for Rory. Surely the bookish young girl who first noticed the bag boy at Doose’s Market would grow up thinking of others or at least giving them the odd thought now and again.

But that delightful mother/daughter relationship that was the crux of the show wouldn’t allow that to happen. Instead of allowing Rory to grow beyond her, Lorelei manages to hold her down.

Perhaps most telling is the fact that the Gilmore girl who shines through is Emily, the original villain of the show. Her development over the course of this second series happens organically and her scenes are regularly the best of the four episodes.

It’s easy to see why: Emily’s story is a natural one. The drama is easy. Her husband of 50 years has died. It’s a story that is plausible, just as response to his death rings true. There is no manufactured drama here, setting it in stark contrast to the lives of her daughter and granddaughter.

Because of that, I’m hoping that the next series — which we will no doubt get — features a little less awfulness and a few more whale hunting stories.