In August of 1990, Detective Comics began a three issue arc by John Ostrander, Flint Henry, Mike McCone, and Jose Marzan, Jr. The issues contain two stories, one about the Batman we know and love, the other about a comic book about Batman. The latter depicts Batman as a crazed demon, while the former features a relatively dark story of insanity and death.

Both stories are intense and at least PG-13.

The question, then, is how did the guy famous for drawings like this:

end up doing the covers for all three of these issues?

Dick Sprang began drawing Batman in 1941, although his work wouldn’t appear in print until 1943. His name was never attached to his work, though, due to the contract DC had with Bob Kane, who stipulated that his name be on all Batman stories.

Sprang’s Batman was bold and bright; his is the epitome of the happy Batman, the version that invariably led to the successful television show. The violence was campy, the villains were colorful, and there was no sex or bloodshed.

Dick Sprang did not draw a dark or psychotic Batman, he drew a fun Batman, one who said things like “old chum.”

He would seem to be an odd choice to draw the covers for three comics so completely at odds with what he had spent his career drawing.

It’s worth noting that Sprang is one of my five favorite Batman artists of all time, joining Neal Adams, Norm Breyfogle, Don Newton, and Jim Aparo), so naturally I bought all three of these comics when they were released.

The juxtaposition of the demonic Batman and the old school thug is jarring and, really, the main indicator (besides the signature) that this is Sprang’s work. If anything, Sprang’s inks looked heavier on his demonic Batman — that foot almost looks like something Charles Burns could have drawn.

Credit to Sprang: he would have been 75 when he did this cover and he clearly adjusted his style a bit to match the story. 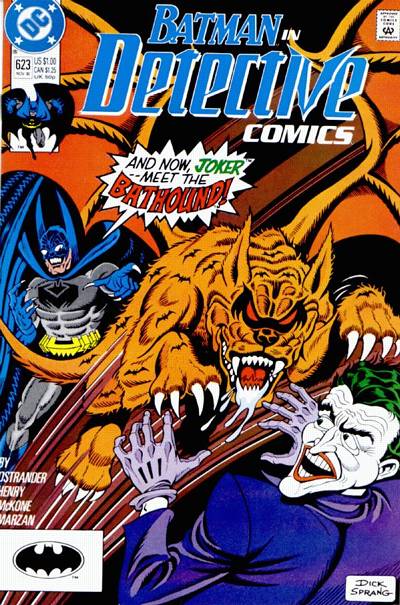 Again we see a battle between the demonic and the Sprangesque. Here it’s the Batman from hell, now with a Hell Bathound with him. But now it’s the Joker, of all characters, who retains that Sprang charm. If it weren’t clear before that Sprang was modifying his work for this effect, it should be now, as taken out of context I doubt anyone could look at that Bathound and mark it as a Sprang original.

And now Catwoman gets the demon treatment, although she doesn’t get it as bad as Batman and Bathound. Again, though, Sprang inserts another element to the cover to play at odds with the characters that are at odds with his usual work. In this case, he adds in Batgirl, although not in a costume that I ever remember seeing. In fact, Sprang had quit drawing Batman before Barbara Gordon ever donned the cape and cowl.

So what was the point?

Why have legendary Batman artist Dick Sprang draw the covers for a three issue arc of Detective Comics that was diametrically opposed to the work he did in his prime?

It might just be that new assistant editor (at the time) Kelly Puckett had a wish list of Batman creators he wanted to work with and this was what he was able to get for Sprang.

Or maybe it was an attempt at establishing how different this arc was going to be, with two conflicting versions of Batman and a cover that gave us a third.

Whatever the reason, these are some fantastic, bizarre pieces of art from one of the all time great Batman artists.

View all posts by