If Grant Morrison has a primary overriding theme in his work, it’s that fiction is real, it simply exists on a different plane of existence than we do. Taken a step further, this means that everything is real, and that we are currently living in something else’s fiction. It’s metafiction taken to its ultimate end and it’s not surprising given that Morrison developed as a writer during a time when post-modernism was all the rage.

It would be easy to say that Morrison’s work is redundant, that his use of metafiction is a crutch, and perhaps it is.  But there’s a reason for it.  He wants this shit to be real.  He desperately wants it to be real.  Maybe not in the sense of someone who can no longer distinguish between what’s real and what isn’t, but in the sense that he believes things should be different.  All that darkness in The Filth, the Invisibles, The Multiversity, and even Batman, that’s all Morrison trying to process the world around him, the world as it is.  But in the end he wants something more, something better.

He has only one power: the ability to create.  So that’s what he does.  He tries to change the world through fiction because fiction is the only weapon he has.

Morrison believes in aspirational characters and they just don’t exist anymore so he had to bring them back.  Imagine that.  Imagine living in a world where the thing you want most, the thing you are looking to for survival or at least some peace of mind, isn’t there.  It might have been once.  There may be shadows.  But that’s it.  You’re wrong and the world is as terrible as you feared.

Morrison’s Batman story began with Batman fighting the devil and ended with Batman inspiring heroes all over the world to take on the mantle of the bat.  He made the definition of the tortured, grim and gritty superhero into an aspirational hero because that’s what Morrison does.

The only way to make Superman real, to make the Flash exist in our world, is by blurring the lines between comic book fiction and our reality. Perhaps Morrison’s stories could thin the walls enough to crack dimensions. Maybe if enough people understood that what they reading was just a different kind of truth, yet true all the same, it would allow the superheroes to get through.

Animal Man, of course, had no idea this is what he was getting into.

A brief side bar: Morrison wrote two stories in 1986 for DC’s UK branch, both illustrated prose stories, one for Batman and one for Superman.  The Batman story is the dictionary definition of a throwaway story, but the Superman story at least introduces some interesting concepts, in this case a “Dream Machine” meant to give the criminal element of Metropolis some insight into what the Man of Steel dreams about.  The machine is dependent upon a device placed on the subject, something Superman notices right away and puts on Krypto, his pet dog.  The dreams that the organized crime bosses see are, needless to say, interesting.

Neither of those stories is particularly relevant to Morrison’s later work, although you could make the case for the dream machine, but we’ll get to that down the line.

No, if we’re going to get into Morrison’s superhero work, the place to start is Animal Man, and rightfully so, not just chronologically speaking, but thematically, too.

Morrison has admitted that the first arc of Animal Man (issues #1-4) were intended to be the entirety of the series, as he believed he was writing a limited series and even then questioned how well it would sell.  It’s very clear, over the course of these issues, that Morrison is working within a box, limited by what he’s trying to do an say because he has an expiration date. 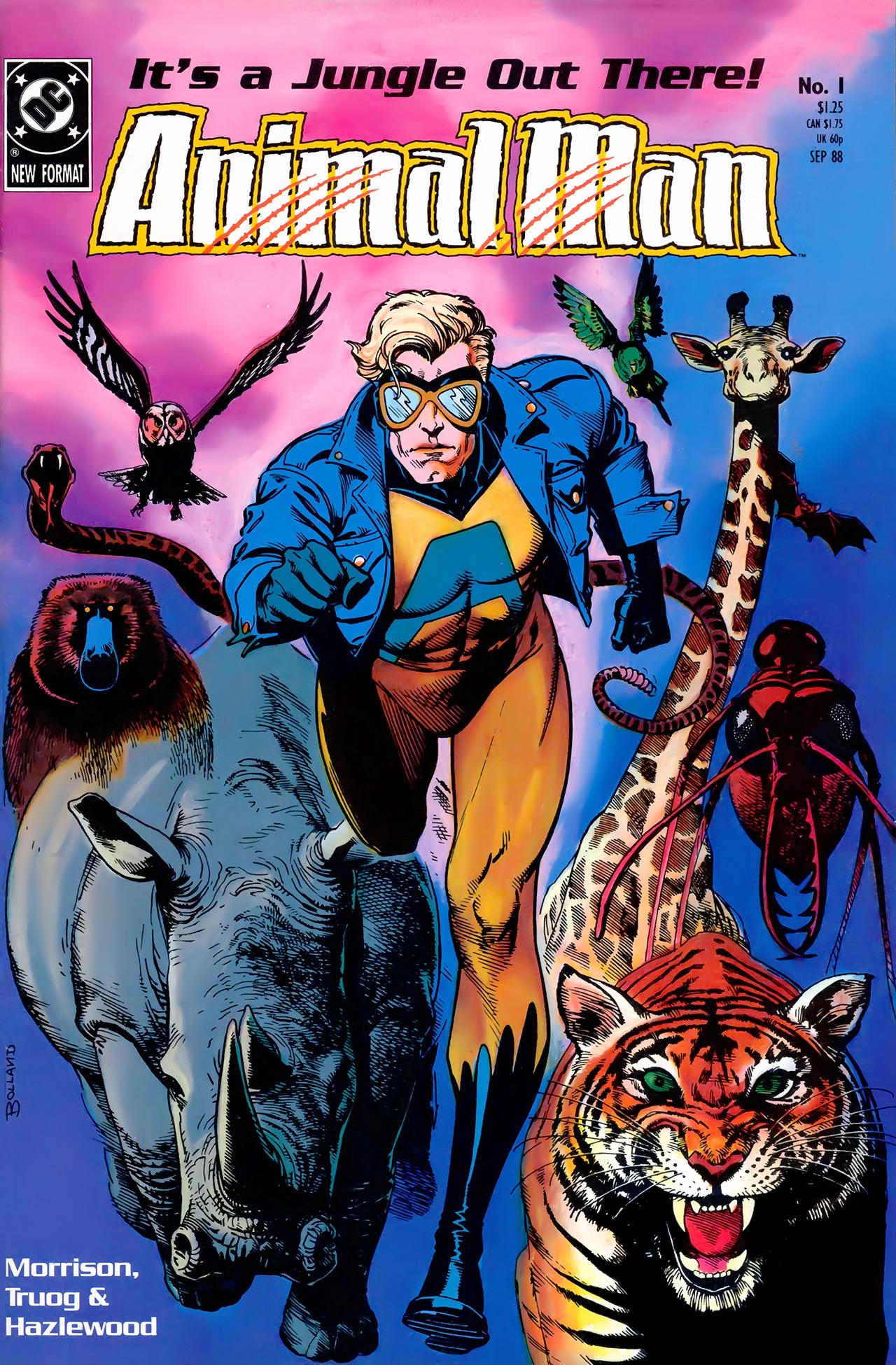 Filtering his animal rights stance through Animal Man seems like a viable angle for rebooting this forgotten hero, but the initial story arc is, at times, a bit on the nose.  I have no doubt that there are morally questionable scientists running experiments on the animals or backwoods hunters who get drunk and would have no qualms about throwing kittens to dogs and raping a woman, but that’s the extent of what we know of these characters.  They’re painted with wide brushes and are more stereotypes than people.   But this is somewhat understandable for two reasons: I have no doubt this is how most English writers view most Americans, and Morrison didn’t really have the time or space to give depth to the conflict.

Had Animal Man ended after four issues as Morrison anticipated, I don’t know that we’d be talking about his superhero work in the same way.  While I don’t doubt that he would have found somewhere else to introduce the concepts he would come back to again and again, it wouldn’t have worked the same with anyone but Animal Man.  Buddy Baker had been a C-list character for decades, literally one of the “forgotten heroes,” which made him the perfect vehicle for what Morrison wanted to do.

He introduced his grand ideas with Animal Man #5, the famous “The Coyote Gospel.”

I will admit that I’m less enamored with “The Coyote Gospel” than more or less everyone who’s ever read it.  I think it’s a great, innovative story, but I think the fact that because I came to it after having read Morrison’s later work, I wasn’t as blown away as those who read it when it was released.

Two things: 1) “our” world is in quotes because it’s not our world, it’s Animal Man’s, which is a significant distinction and 2) Crafty was sent to our world by his god and suffers so that his people can have peace.  Not a stretch to see why this is called “The Coyote Gospel,” although the metaphor doesn’t hold up exactly (he’s suffering on “our” world, but not for “us”).

Crafty is survives being shot, having a boulder dropped on him, and a bomb going off, after which he finds Animal Man and hands him a piece of paper, his gospel, the story of Crafty.  But it’s written in whatever language Crafty speaks and indecipherable to Animal Man.

And then Crafty is shot and killed, by the gay Christian truck driver, using a silver bullet he made out of the cross his dead boyfriend gave him.

Unpack that last sentence.  The allusions and challenges to Christianity are flying fast and furious and that’s even before we see Crafty in the Jesus Christ pose as he’s dying.

But it’s the last few panels that deliver the big moment.  We pull back further and further until we actually see a hand, drawing the panel (painting in the blood, specifically – the color red will begin to play a large role in the series).  We’ve stepped off the page now, to see the hand that’s creating the story.

This isn’t just the first direct moment of metafiction in Morrison’s DC superhero work, it’s a layered manifesto of what’s to come.  Given what we had just read in Animal Man #5, this god-like hand must be Crafty’s creator, particularly since he’s drawing Crafty’s death scene.  But Crafty isn’t in his own world, he’s in Animal Man’s, so is this artist also a god figure for Animal Man?  But we know who draws Animal Man: Chas Truog and Doug Hazlewood draw Animal Man.  But that hand is in the comic, on the page, and also drawn by Truog and Hazlewood, which means that this god hand isn’t a god hand to us.  We, in fact, are its creator.

And this was just the beginning…

View all posts by kylegarret